How big of a lawn would you have to have so that when you finished mowing you'd need to start over because the grass has grown?

According to the Turfgrass Extension and Outreach program at UIUC,[1]The Morrow cornfields operated by the university are the most valuable cornfields in the world, and part of one of the world's longest-running scientific experiments. every mowing should remove one third of the grass blade's height.

Grass grows slower or faster depending on the weather, but we'll assume an average growth rate of 0.2 inches per day. This figure comes from Mowing Your Lawn, a document published by Iowa State's Yard and Garden Extension program (which, I like to imagine, has a vicious and occasionally bloody rivalry with the UIUC Turfgrass crew).

A typical pushmower at a fast walking speed can mow a little under a square meter per second. If you mowed without stopping from 8:00 AM to 6:00 PM, you would cover about 25,000 square meters.[2]or 6 acres, or 2.5 hectares, or 7,500 square fathoms, or 8,500 square smoots, or 5,300 Shrouds of Turin To maintain your lawn at a height of four inches, you would need to mow it every ten days. If you mowed more or less frequently, you could risk damaging the lawn—or, worse, incur the wrath of UIUC.

At ten hours of mowing per day, you could cover a quarter of a square kilometer before you'd have to circle back to the beginning and start over. If the entire area of Vatican City, indoors and out, were covered in perennial ryegrass,[3]Perhaps due to an ill-advised UIUC undergraduate project you would be able to keep about half of it neatly trimmed. 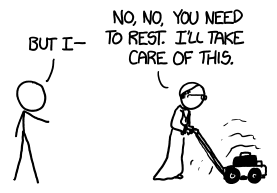 You could improve on this with a larger, faster mower. An oversized rider mower at 12 miles per hour[4]The maximum listed in the Cub Cadet rider mower acres-per-hour chart could mow as much as two square kilometers, which Wolfram|Alpha helpfully tells me is 0.5% to 1% of an adult male cougar's home range.

In 2010, Bobby Cleveland set a world record for the top speed in a riding lawnmower, hitting 96 mph. This record was set as part of a rivalry with the British lawnmower driver Don Wales.[5]Really.

In a blow to its national pride, the US has lost that record. Sometime in the last few years, the magazine Top Gear commissioned Honda to build them an even faster lawnmower. A few months ago, this mower—which shoots flames from the exhaust pipe—broke 100 mph on a test track in France.[6]"First tests of '130mph' lawnmower", BBC News Technology, 17 July 2013 The builders claim it will eventually reach 130 mph. The mower is still capable of cutting grass (using a custom wire mechanism), but when running at top speed the trimmer is removed for safety reasons.

With the Top Gear mower, what's the maximum area we could cut?

Let's set safety aside and assume we can leave the mower's cutting mechanism in place. Let's also assume that the mower can cut a strip two meters wide while running at top speed.

Under those assumptions, if the mower is run for 24 hours a day, seven days a week ...

... it could just about keep one adult male cougar's home range neatly trimmed.