I was absentmindedly stirring a cup of hot tea, when I got to thinking, "aren't I actually adding kinetic energy into this cup?" I know that stirring does help to cool down the tea, but what if I were to stir it faster? Would I be able to boil a cup of water by stirring?

The basic idea makes sense. Temperature is just kinetic energy. When you stir tea, you're adding kinetic energy to it, and that energy goes somewhere. Since the tea doesn't do anything dramatic like rise into the air or emit light, the energy must be turning to heat. 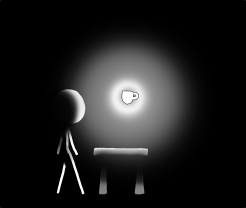 If you want to heat water from room temperature to nearly boiling in two minutes, you'll need a lot of power:

(Note: Pushing almost-boiling water to boiling takes a large burst of extra energy on top of what's required to heat it to the boiling point—this is called the enthalpy of vaporization.)

Our formula tells us that if we want to make a cup of hot water in two minutes, we'll need a 700-watt power source. A typical microwave uses 700 to 1100 watts, and it takes about two minutes to heat a mug of water to make tea. It's nice when things work out![2]If they didn't, we'd just blame "inefficiency" or "vortices".

700 watts for two minutes is an awful lot of energy. When water falls from the top of Niagara Falls, it gains kinetic energy, which is converted to heat at the bottom. But even after falling that great distance, the water only heats up by a fraction of a degree.[3]\(\text{Height of Niagra Falls}\times\frac{\text{Acceleration of gravity}}{\text{Specific heat of water}}=0.12^\circ\text{C}\) To boil a cup of water, you'd have to drop it from higher than the top of the atmosphere. 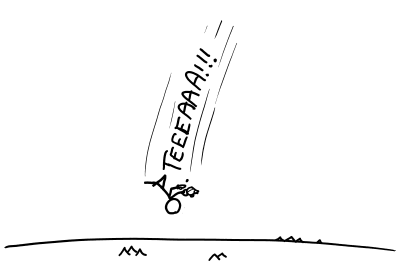 How does stirring compare to microwaving?

Based on figures from industrial mixer engineering reports,[4]Brawn Mixer, Inc., Principles of Fluid Mixing (2003) I estimate that vigorously stirring a cup of tea adds heat at a rate of about a ten-millionth of a watt. That's completely negligible.[5]Tea loses heat a much higher rate than this. See: Ben Harden, Tea temperature vs. Time graph

The physical effect of stirring is actually a little complicated.[6]In some situations, mixing liquids can actually help keep them warm. Hot water rises, and when a body of water is large and still enough (like the ocean) a warm layer forms on the surface. This warm layer radiates heat much more quickly than a cold layer would. If you disrupt this hot layer by mixing the water, the rate of heat loss decreases.

This is why hurricanes tend to lose strength if they stop moving forward—their waves churn up cold water from the depths, cutting them off from the thin layer of hot surface water that was their main source of energy. Most of the heat is carried away from teacups by the air convecting over them, and so they cool from the top down. Stirring brings fresh hot water from the depths, so it can help this process. But there are other things going on—stirring disturbs the air, and it heats the walls of the mug. It's hard to be sure what's really going on without data.

Fortunately, we have the internet. StackExchange user drhodes measured the rate of teacup cooling from stirring vs. not stirring vs. repeatedly dipping a spoon into the cup vs. lifting it. Helpfully, drhodes posted both high-resolution graphs and the raw data itself, which is more than you can say for a lot of journal articles.

The conclusion: It doesn't really matter whether you stir, dip, or do nothing; the tea cools at about the same rate (although dipping the spoon in and out of the tea cooled it slightly faster).

Which brings us back to the original question: Could you boil tea if you just stirred it hard enough?

The first problem is power. 700 watts is about a horsepower, so if you want to boil tea in two minutes, you'll need at least one horse to stir it hard enough. 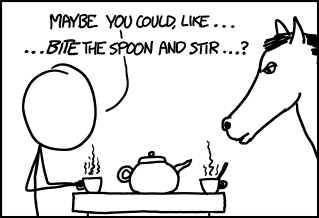 You can reduce the power requirement by heating the tea over a longer period of time, but if you reduce it too far the tea will be cooling as fast as you're heating it.

Even if you could churn the spoon hard enough—tens of thousands of stirs per second—fluid dynamics would get in the way. At those high speeds, the tea would cavitate; a vacuum would form along the path of the spoon and stirring would become ineffective.

And if you stir hard enough that your tea cavitates, its surface area will increase very rapidly, and it will cool to room temperature in seconds: 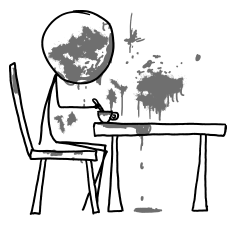 No matter how hard you stir your tea, it's not going to get any warmer.