How close would you have to be to a supernova to get a lethal dose of neutrino radiation?

(Overheard in a physics department)

The phrase "lethal dose of neutrino radiation" is a weird one. I had to turn it over in my head a few times after I heard it.

If you're not a physics person, it might not sound odd to you, so here's a little context for why it's such a surprising idea:

Neutrinos are ghostly particles that barely interact with the world at all. Look at your hand—there are about a trillion neutrinos from the Sun passing through it every second.

The reason you don't notice the neutrino flood is that neutrinos hardly interact with ordinary matter at all. On average, out of that massive flood, only one neutrino will "hit" an atom in your body every few years.[1]Less often if you're a child, since you have fewer atoms to be hit. Statistically, my first neutrino interaction probably happened somewhere around age 10.

In fact, neutrinos are so shadowy that the entire Earth is transparent to them; nearly all of the Sun's neutrino flood goes straight through it unaffected. To detect neutrinos, people build giant tanks filled with hundreds of tons of material in the hopes that they'll register the impact of a single solar neutrino.

This means that when a particle accelerator (which produces neutrinos) wants to send a neutrino beam to a detector somewhere else in the world, all it has to do is point the beam at the detector—even if it's on the other side of the Earth!

That's why the phrase "lethal dose of neutrino radiation" sounds weird—it mixes scales in an incongruous way. It's like the idiom "knock me over with a feather" or the phrase "football stadium filled to the brim with ants".[2]Which would still be less than 1% of the ants in the world. If you have a math background, it's sort of like seeing the expression "ln(x)e"—it's not that, taken literally, it doesn't make sense, but it's hard to imagine a situation where it would apply.[3]If you want to be mean to first-year calculus students, you can ask them to take the derivative of ln(x)e dx. It looks like it should be "1" or something, but it's not.

Similarly, it's so hard to get enough neutrinos to compel even a single one of them to interact with matter, making it hard to picture a scenario in which there'd be enough of them to affect you.

Supernovae[4]"Supernovas" is also fine. "Supernovii" is discouraged. provide that scenario. The physicist who mentioned this problem to me told me his rule of thumb for estimating supernova-related numbers: However big you think supernovae are, they're bigger than that.

Here's a question to give you a sense of scale:

Which of the following would be brighter, in terms of the amount of energy delivered to your retina: 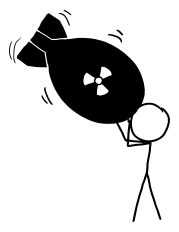 Applying the physicist rule of thumb suggests that the supernova is brighter. And indeed, it is ... by nine orders of magnitude.

A paper by radiation expert Andrew Karam provides an answer.[5]Karam, P. Andrew. "Gamma And Neutrino Radiation Dose From Gamma Ray Bursts And Nearby Supernovae." Health Physics 82, no. 4 (2002): 491-499. It explains that during certain supernovae, the collapse of a stellar core into a neutron star, 1057 neutrinos can be released (one for every proton in the star that collapses to become a neutron).

Karam calculates that the neutrino radiation dose at a distance of one parsec[6]3.262 light-years, or a little less than the distance from here to Alpha Centauri. would be around half a nanosievert, or 1/500th the dose from eating a banana.[7]xkcd.com/radiation

Core collapse supernovae happen to giant stars, so if you observed a supernova from that distance, you'd probably be inside the outer layers of the star that created it.

The idea of neutrino radiation damage reinforces just how big supernovae are. If you observed a supernova from 1 AU away—and you somehow avoided being being incinerated, vaporized, and converted to some type of exotic plasma—even the flood of ghostly neutrinos would be dense enough to kill you.

If it's going fast enough, a feather can absolutely knock you over. 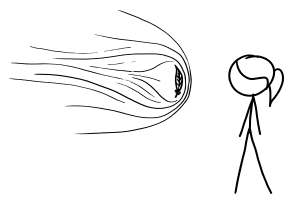