How much of the Earth's currently-existing water has ever been turned into a soft drink at some point in its history?

First, a tiny bit of background: In the beverage industry, "soft drink" technically refers to any non-alcoholic packaged beverage, but it's commonly used to mean carbonated beverages.[1]In the US, the word people use to refer to a generic carbonated beverage—"soda" vs. "pop" vs. "coke"—strongly depends on where they live. Carbonated water was first produced in the 1700s, and gained popularity as "tonic water" (carbonated water mixed with quinine powder, which has anti-malaria properties), and in carbonated lemonade.[2]Shahan Cheong, Taking the Waters: The History of the Modern Soft-Drink, Not Yet Published (blog post)

The vast majority of all soft drinks ever consumed have been consumed in the last 40 years. Carbonated beverages were fairly popular in the industrialized world throughout the 20th century, but population growth and the spread of companies like Coca-Cola into the developing world mean that the total soda consumption per year has grown relatively fast.

Total soft drink consumption in 2013 was about 188 billion liters. That's 26 liters per person annually, or 70 mL/day.[3]MarketLine, Carbonated Soft Drinks: Global Industry Guide (In the US, the average was 170 liters, or about one 16-oz drink per person per day[4]Dan Check, Matt Dodson, and Chris Kirk, Americans Drink More Soda Than Anyone Else (slate.com)).

Over the past several centuries, humans have probably consumed about 6.5 trillion liters of carbonated beverages.[5]This is a ballpark guess based on population growth and some rough estimates of when soda-drinking became popular in different parts of the world.

That's a lot, certainly. For example, it's enough to fill every house and apartment in the US to a depth of 12 inches:

Even if we assume that every soda is made from an entirely new batch of water, and doesn't include any water from previous sodas, it still represents a tiny fraction of the world's fresh water, and an even tinier fraction of the total volume of the oceans.

What if we expand the question to cover all drinking water? What percentage of water molecules have been drunk[6]Drank? Drinked? Drankéd? by someone at some point?

Humans have been around for a few hundred thousand years, and the total number of humans who have ever lived is usually estimated to be around 110 billion. The question of how much water we should drink per day is the subject of furious debate—the "8 glasses" thing seems to be a myth—but the amount of water we actually drink per day seems to be about a liter.[7]EPA, Estimated Per Capita Water Ingestion and Body Weight in the United States–An Update (2004) This amount varies a little depending on climate, but if we assume the average historical human drank a liter of water per day for 40 years,[8]This is a rough ballpark estimate; it's lower than the 70 or 80 years you might expect because we have to account for the changing human lifespans throughout history and the decreased water consumption by children. then our species has drunk about 100 trillion liters of water in total.

100 trillion liters (100 km3) is still very little compared to even the volume of all rivers (1,200 km3). This means that, since our drinking water passes through the water cycle and is quickly diluted by rivers and oceans, the majority of the water molecules we drink have never been drunk by any other human.[9]On the other hand, it's just about guaranteed that some of the water molecules in any mouthful have been drunk by someone else.

But we're just one species.

Dinosaurs, as a taxonomic group, have been around[10]They're still around! for 230 million years, but their heyday was the mid-to-late Jurassic period. In this period, there were probably around 5 trillion kilograms of dinosaur alive at any given time.[11]Jerzy Trammer, "Differences in global biomass and energy use between dinosaurs and mammals", Acta Geologica Polonica, Vol. 61 (2011), No. 2, pp. 125–132 (Today, there are probably only a few hundred billion kilograms of living dinosaur,[12]I haven't been able to find an estimate for total global bird biomass, but I'll take any chance to cite my favorite journal article ever: "How Many Birds Are There?", by Kevin J. Gaston and Tim M. Blackburn, which estimates the total number at about 300 billion. A later paper lowered the estimate to about 80 billion, so unless the average bird weighs 140 lbs, there is far less dinosaur in the world today than in the Jurassic. 50 billion of it chicken).

If we assume Jurassic dinosaur water requirements were similar to mammal ones,[13]Animal weights and their food and water requirements then this suggests dinosaurs drank something like 1022 or 1023 liters of water during the Mesozoic era—more than the total volume of the oceans (1021 liters).

The average "residence time" of water in the oceans—the amount of time a water molecule spends there before moving into another part of the water cycle—is about 3,000 years,[14]K. L. Schulz, Water in the Biosphere and no part of the water cycle traps water for more than a few hundred thousand years. This means we can assume that, over timescales of millions of years, Earth's water is thoroughly mixed—and dinosaurs had plenty of time to drink it all many times over.

This means that while the chances are that most of the water in your soda has never been in another soda, almost all of it has been drunk by at least one dinosaur. 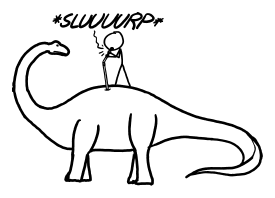