At what point in human history were there too many (English) books to be able to read them all in one lifetime?

This is a complicated question. Getting accurate counts of the number of extant books at different times in history is very hard bordering on impossible. For example, when the Library of Alexandria burned, a lot of writing was lost,[1]On the other hand, a lot of Egyptian readers were probably excited to get out of overdue book fines. but how much writing was lost is hard to pin down. Some estimates range from 40,000 books to 532,800 scrolls,[2]The Great Library of Alexandria and other writers say that all those numbers are implausible.

Researchers Eltjo Buringh and Jan Luiten van Zanden used historical book catalogs to put together statistics on the number of books (or manuscripts) published annually per region.[3]Charting the “Rise of the West”: Manuscripts and Printed Books in Europe, A Long-Term Perspective from the Sixth through Eighteenth Centuries By their figures, the rate of publication in the British Isles probably passed one manuscript per day in around the year 1075 CE.

Most of the manuscripts published in 1075 weren't in English, or even the variants of English common at the time. In 1075, literature was typically written in some form of Latin or French, even in areas where Old English was commonly spoken on the street.

The Canterbury Tales (written in the late 1300s) were part of a move toward vernacular English as a literary language, although they're not exactly readable to a modern eye:

Wepyng and waylyng, care and oother sorwe
I knowe ynogh, on even and a-morwe,'
Quod the Marchant, 'and so doon oother mo
That wedded been.

Even if we know how many manuscripts were published per year, in order to answer Gregory's question, we still need to know how long it takes to read a manuscript.

Rather than trying to figure out how long all the lost books and codices are, we can step back and take a longer view of things.

Some writers are substantially faster. In the preface to Opus 200, the prolific writer Isaac Asimov estimated that he had published about 15,000,000 words between age 30 and 50. His average over his writing career might have been around 1 word per minute, and at times he was averaging writing several thousand words per day. (Over his entire life, his average dips as low as 0.5 words per minute.) Some pulp writers have even higher averages.

It's reasonable to assume historical writers had a similar range of speeds. You might point out that typing on a keyboard is more than twice as fast as writing a manuscript in longhand. But typing speed isn't a writer's bottleneck. After all, at a typing speed of 70 words per minute, it should only take 24 hours to type out To Kill a Mockingbird. 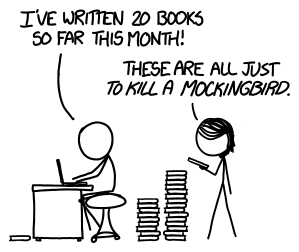 Typing and writing speeds are so different because the limit on writing speed is how quickly our brains can organize, produce, and edit stories. This "storytelling speed" has probably changed much less over time than our physical writing speed has.

This gives us a much better way to estimate when the number of books became too large to read. 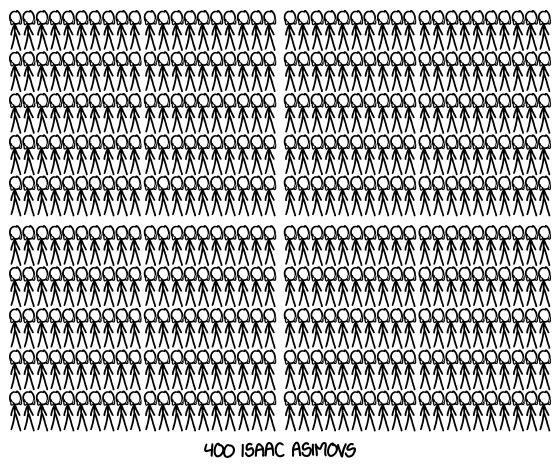 If we estimate that during their active periods, writers are producing somewhere between 0.1 and 1 word per minute, then one dedicated reader might be able to keep up with a population of about 500 or 1,000 active writers. The answer to Gregory's question—the date at which there were too many English books to read in a lifetime—happened sometime before the population of active English writers reached a few hundred. At that point, catching up became impossible.

The magazine Seed estimates that the total number of authors reached this point around the year 1500 and has continued rising rapidly ever since.[5]Seed: A Writing Revolution The number of active English writers crossed this threshold shortly thereafter, around the time of Shakespeare, and the total number of books in English probably passed the lifetime reading limit sometime in the late 1500s.

On the other hand, how many of them would you want to read? If you go to goodreads.com/book/random, you can see a semi-random sample of what you'd be reading. Here's what came up for me:

To make it through the rest, I might need to recruit some help.