If a T-rex were released in New York City, how many humans/day would it need to consume to get its needed calorie intake?

About half of an adult, or one ten-year old child:

Tyrannosaurus rex weighed about as much as an elephant.[1]This always seemed a little off to me; my mental image of elephants is that they're in the same size range as cars or trucks, whereas T-rex, as Jurassic Park showed, is big enough to stomp on cars. But a Google image search for car+elephant shows elephants looming over cars just like the T-rex in Jurassic Park. So, great, now I'm also afraid of elephants.

No one is totally sure what dinosaur metabolism looked like, but the best guesses for how much food T-rex ate seem to cluster around 40,000 calories per day.[2]Food calories (kcal). Sources: This and this, and this with some notes from this and distraction from this.

If we assume dinosaurs had metabolisms similar to today's mammals, they'd eat a lot more than 40,000 calories each day. But the current thinking is that while dinosaurs were more active (loosely speaking, "warm-blooded") than modern snakes and lizards, very large dinosaurs probably had metabolisms that more closely resembled komodo dragons than elephants and tigers.[3]For big sauropods, we know this must be the case, because otherwise they would overheat. However, there's a lot of uncertainty surrounding T-rex-sized dinosaurs.

Next, we need to know how many calories are in a human. This number is helpfully provided, by Dinosaur Comics author Ryan North, on this wonderful t-shirt. Ryan's shirt tells us that an 80-kg human contains about 110,000 calories of energy.

Therefore, a T-rex would need to consume a human every two days or so.[4]Although a T-rex would likely be willing to eat several days to weeks worth of food in one meal, so if it has the option, it might eat a bunch of people at a time, then go for a while without eating. The city of New York had 239,736 births in 2011, which could support a population of about 1,000 tyrannosaurs. However, this ignores immigration—and, more importantly, emigration, which would probably increase substantially in this scenario. 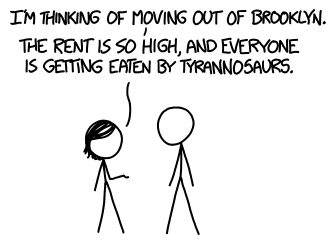 The 33,000 McDonald's restaurants worldwide sell something like 15 billion hamburger patties per year,[5]They stopped reporting the "x billions served" number on their signs, but this website has some extrapolations. for an average of 1,245 burgers per restaurant per day. 1,245 burgers is about 600,000 calories, which means that each T-rex only needs about 80 hamburgers per day to survive, and one McDonald's could support over a dozen tyrannosaurs on hamburgers alone. 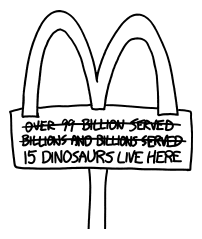 Ands if you live in New York, and you see a T-rex, don't worry. You don't have to choose a friend to sacrifice; just order 80 burgers instead.

And then if the T-rex goes for your friend anyway, hey, you have 80 burgers.