Is there any way to fire a gun so that the bullet flies through the air and can then be safely caught by hand? e.g. shooter is at sea level and catcher is up a mountain at the extreme range of the gun.

The "bullet catch" is a common magic trick in which a magician appears to catch a fired bullet in mid-flight—often between their teeth. This an illusion, of course; it's not possible to catch a bullet like that.[1]This was confirmed by Mythbusters in episode 4 of Season 4.

But under the right conditions, you could catch a bullet. It would just take a lot of patience.[2]I'd like to remind everyone that while I write sometimes about the interesting physics of bullets, I'm not an authority on firearms safety. I was raised Quaker; I've never held a gun, much less fired one.

A bullet fired straight up would eventually reach a maximum height.[3]Don't do this. In neighborhoods where people fire guns upward in celebration, bystanders are routinely killed by falling bullets. It probably wouldn't stop completely; more likely, it would be drifting sideways at a couple meters per second. At that speed, as long as you were in the right place at the right time, you could snatch it out of the air.

If someone fired a bullet upward ... 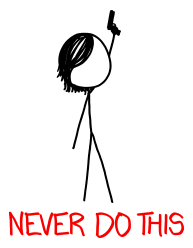 ... and you were hanging out in a hot-air balloon directly above the firing range ... 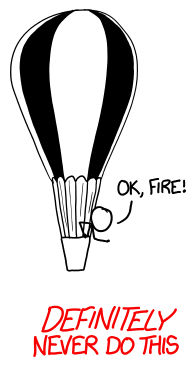 ... it's possible that you could reach out and snag the bullet at the apex of its flight.

If you succeeded, you might notice something odd: In addition to being hot, the bullet would be spinning. It would have lost its upward momentum, but not its rotational momentum; it would still have the spin given to it by the barrel of the gun.

This effect can be seen, dramatically, when a bullet is fired at ice.[4]Floor water. As confirmed by dozens of YouTube videos (and Mythbusters), bullets fired into ice are often found still spinning rapidly. You'd have to grab the bullet firmly; otherwise, it might jump out of your hand.

If you don't have a balloon, you could potentially make this work from a mountain peak. Mount Thor, which you may remember from question #51, features a vertical drop of 1,250 meters. According to ballistics lab Close Focus Research, this is almost exactly how high a .22 Long Rifle bullet will fly if fired directly upward.[5]Close Focus Research, Maximum Altitude For Bullets Fired Vertically 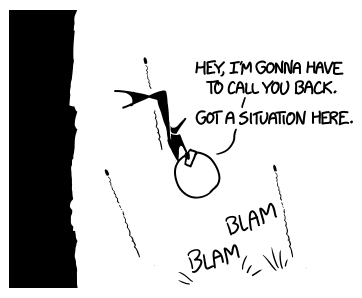 If you want to use larger bullets, you'll need a much larger drop; an AK-47's bullet can go over two kilometers upward. There are no purely vertical cliffs that are that tall, so you'd need to fire the bullet at an angle, and it would have significant sideways speed at the top of its arc. However, a suitably tough baseball glove might be able to snag it.[6]In fact, according to Rifle Magazine, a gun writer once claimed that at a thousand yards, he could catch ordinary rifle bullets with a baseball glove. Of course, he was being figurative—you wouldn't see the bullet coming, so you'd be just as likely to catch it with your face as with your glove.

In any of these scenarios, you'd have to get extraordinarily lucky. Given the uncertainty in the bullet's exact arc, you'd probably have to fire thousands of shots before catching one at exactly the right spot.

And by that point, you may find you've attracted some attention. 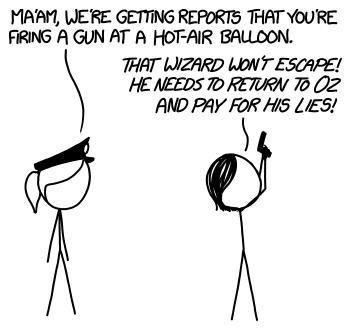