Astrophysicists are always saying things like "This mission to this comet is equivalent to throwing a baseball from New York and hitting a particular window in San Francisco." Are they really equivalent?

No; the baseball thing is much harder.

To throw something from New York to LA, you have to lob it out of the atmosphere like an ICBM.[1]Launched by New York at LA, as I'm sure happens now and then.

Unfortunately, baseballs are too small to punch through the atmosphere. No matter how fast they're going, they'll wind up stopping before they make it to space. If you wanted to hit a window in LA with a baseball, you'd have better luck throwing it at a plane and hoping it gets lodged in the landing gear during takeoff.

The comet-visiting spacecraft Tom's astrophysicists are referring to is probably Rosetta, which is about to orbit the comet 67P/Churyumov–Gerasimenko and send a lander down to its surface.

Note: 67P/Churyumov–Gerasimenko is a mouthful, so for the rest of this article I'm just going to call the comet "Kevin".

Rosetta is currently about to arrive at Kevin, and is about 780 million kilometers from Earth. It's taken a roundabout route: 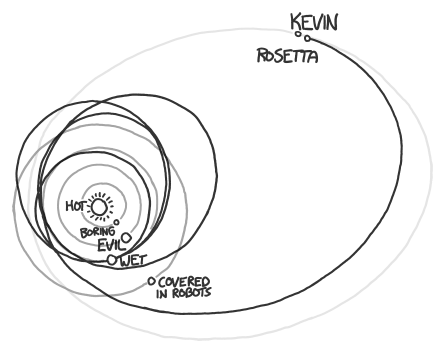 Kevin, Rosetta's target, is about 4 km wide. Since it's 780 million kilometers away. If it were as far away as San Francisco is from New York, the target would be two centimeters wide—even more impressive than the statistic Tom quoted.

So Rosetta hitting its target is like throwing an object from New York and having it hit a particular key[2]Tilde, if you're curious. on a keyboard in San Francisco. 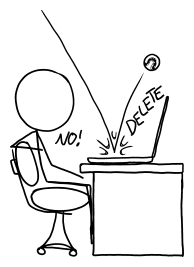 It's not a fair comparison, but you gotta admit, it sounds pretty precise. I once heard an account from someone who worked on the Cassini-Huygens mission, where one of the designers pointed out that their spacecraft traveled to a target a billion kilometers away, and arrived within something like a second and a half of the scheduled time.[3]Despite searching, I've been unable to track down this interview. If you see it, let me know!

On the other hand, we could make less flattering comparisons.

Take remote surgery. If a surgeon in New York uses a remote surgery robot in San Francisco to do eye surgery, and the robot aims for the patient's eye with the precision of Rosetta's approach, it will point its laser somewhere around here:

However this isn't a fair comparison either. Both Rosetta and our laser surgeon[4]I really hope that's what this job is called will refine their movements as they make their final approaches, achieving very high precision.

When it comes down to it, the two tasks—remote surgery and remote probe-landing—are probably about equally precise, in a distance sense.

Which brings me to something a little different with which I'd like to end this article: A question for you to try to answer. Namely:

Would you rather bet a million dollars on a spacecraft landing engineer's ability to successfully perform eye surgery, or an eye surgeon's ability to land a probe on a comet?

I haven't been able to decide. 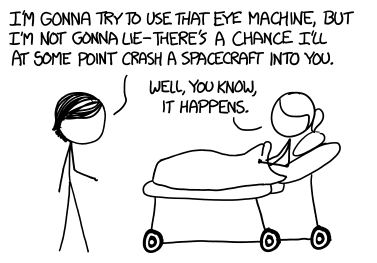