If you made a beach using grains the proportionate size of the stars in the Milky Way, what would that beach look like?

When people do those calculations, they often dig up some good data on the number of stars, then do some hand-waving about sand grain size to come up with a number for the sand grains on Earth.[1]From a practical point of view, geology and soil science are more complicated than astrophysics. We're not going to tackle that issue today, but to answer Jeff's question, we do need to figure out what the deal with sand is.[2]"i like sand because i don't really know what it is and there's so many of it"

—@darth__mouth Specifically, we need to have some idea of what grain sizes correspond to clay, silt, fine sand, coarse sand, and gravel, so we can understand how our galaxy would look and feel if it were a beach.[3]Instead of just containing a bunch of them.

Fortunately, there's a wonderful chart by the US Geologic Survey that answers all these questions and more. For some reason, I find this chart very satisfying—it's like the erosion geology edition of the electromagnetic spectrum chart.

According to surveys of sand,[4]There are apparently lots of them. the grains found on beaches tend to run from 0.2mm to 0.5mm (with the finest layers on top). This corresponds to medium-to-coarse sand in the chart. The individual grains are about this big: 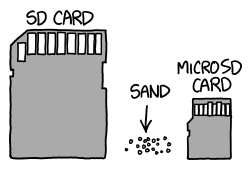 If we assume the Sun corresponds to a typical sand grain, then multiply by the number of stars in the galaxy, we come up with a large sandbox worth of sand.[5]I mean, you come up with a bunch of numbers, but imagination turns them into a sandbox.

However, this is wrong. The reason: Stars aren't all the same size.

There are a number of widely-circulated YouTube videos comparing star sizes. They do a good job of getting across just how staggeringly large some stars are. Although it's easy to get lost in the videos and lose track of scale, it's clear that some of the grains in our sandbox universe would be more like boulders.

Here's how the main-sequence[6]The stars in the main part of their fuel-burning lifecycle. star-sand grains look: 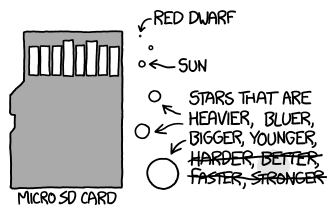 They mostly fall into the "sand" category, though the larger Daft Punk stars cross the line into "granules" or "small pebbles".

However, that's just the main sequence stars. Dying stars get much, much bigger. 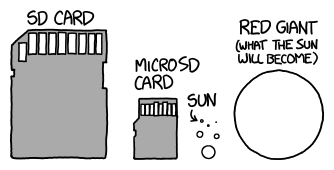 When a star runs out of fuel, it expands into a red giant. Even ordinary stars can produce huge red giants, but when a star that's already massive enters this phase, it can become a true monster. These red supergiants are the largest stars in the universe. 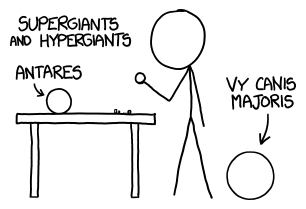 These beachball-sized sand stars would be rare, but the grape-sized and baseball-sized red giants are relatively common. While they're not nearly as abundant as Sun-like stars or red dwarfs, their huge volume means that they'd constitute the bulk of our sand. We would have a large sandbox worth of grains ... along with a field of gravel that went on for miles.

The little sand patch would contain 99% of the pile's individual grains, but less than 1% of its total volume. Our Sun isn't a grain of sand on a soft galactic beach; instead, the Milky Way is a field of boulders with some sand in between.

But, as with the real Earth seashore, it's the rare little stretches of sand between the rocks where all the fun seems to happen.