Has humanity produced enough paint to cover the entire land area of the Earth?

This answer is pretty straightforward. We can look up the size of the world's paint industry, extrapolate backward to figure out the total amount of paint produced. We'd also need to make some assumptions about how we're painting the ground. Note: When we get to the Sahara desert, I recommend not using a brush.

But first, let's think about different ways we might come up with a guess for what the answer will be. In this kind of thinking—often called Fermi estimation—all that matters is getting in the right ballpark; that is, the answer should have about the right number of digits. In Fermi estimation, you can round[1]Using the formula \(\text{Fermi}(x) = 10^{\text{round}(log_{10}x)}\), meaning that 3 rounds to 1 and 4 rounds to 10. all your answers to the nearest order of magnitude: 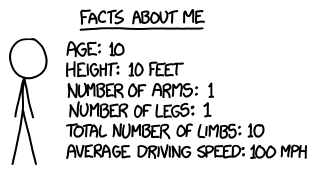 Let's suppose that, on average, everyone in the world is responsible for the existence of two rooms, and they're both painted. My living room has about 50 square meters of paintable area, and two of those would be 100 square meters. 7.15 billion people times 100 square meters per person is a little under a trillion square meters—an area smaller than Egypt.

Let's make a wild guess that, on average, one person out of every thousand spends their working life painting things. If I assume it would take me three hours to paint the room I'm in,[2]This is probably optimistic, especially if there's an internet connection in the room. and 100 billion people have ever lived, and each of them spent 30 years painting things for 8 hours a day, we come up with 150 trillion square meters ... just about exactly the land area of the Earth.

How much paint does it take to paint a house? I'm not enough of an adult to have any idea, so let's take another Fermi guess.

Based on my impressions from walking down the aisles, home improvement stores stock about as many light bulbs as cans of paint. A normal house might have about 20 light bulbs, so let's assume a house needs about 20 gallons of paint.[3]These are very rough estimates. Sure, that sounds about right.

The average US home costs about \$200,000. Assuming each gallon of paint covers about 300 square feet, that's a square meter of paint per \$300 of real estate. I vaguely remember that the world's real estate has a combined value of something like \$100 trillion,[4]Citation: This really boring dream I had once. which suggests there's about 300 billion square meters of paint on the world's real estate. That's about one New Mexico.

Of course, both of the building-related guesses could be overestimates (lots of buildings are not painted) or underestimates (lots of things that are not buildings[5]EXAMPLES OF THINGS THAT ARE NOT BUILDINGS: Ducks, M&Ms, cars, the Sun, cuttlefish, microchips, Macklemore, lightning, goat blood, zeppelins, tapeworms, pickle jars, those sticks you use to toast marshmallows, alligators, tuning forks, minotaurs, Perseid meteors, ballots, crude oil, sponsored tweets, and catapults that throw handfuls of engagement rings. are painted) But from these wild Fermi estimates, my guess would be that there probably isn't enough paint to cover all the land.

So, how did Fermi do?

According to the report The State of the Global Coatings Industry, the world produced 34 billion liters of paints and coatings in 2012.

If we assume paint production has, in recent decades, followed the economy and grown at about 3% per year, that means the total amount of paint produced equals the current yearly production times 34.[6]\((1+\tfrac{1}{0.03})\) That comes out to a little over a trillion liters of paint. At 30 square meters per gallon,[7]"Square meters per gallon" is a pretty obnoxious unit, but I think it's not quite as bad as acre-foot (a foot by a chain by a furlong), which is an actual unit used in technical papers I was trying to read this week. that's enough to cover 9 trillion square meters—about the area of the United States.

So the answer is no; there's not enough paint to cover the Earth's land, and—at this rate—probably won't be enough until the year 2100.

Score one for Fermi estimation. 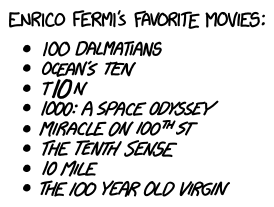