Assuming that you have a spaceship in orbit around the Earth, could you propel your ship to speeds exceeding escape velocity by hitting golf balls in the other direction? If so, how many golf balls would be required to reach the Moon?

It depends how good your swing is.

That sounds glib, but it's sort of true. The answer to this question hinges on exactly how fast you can hit a golf ball.

Sometimes, exact numbers don't matter that much. If my baseball, car, dog, or Zamboni goes a little faster than yours,[1]$20 says they will! it will go a little farther. But that's not how it works in rocket golf. The design of our spaceship turns out to involve an equation where the speed of the golf ball is in the exponent. That means a small change in speed can make a big difference.

The equation in question—which might be my favorite in all of physics—the Tsiolkovsky rocket equation:

This equation comes up a lot in What If calculations. I like it both because it says something fundamental about our ability to explore the universe, and because you can use it to get really good at Kerbal Space Program.

With some rearranging, the equation can help us figure out how much of our ship's weight has to be golf balls:

Someone who, like me, has never been golfing before, might—after swinging and missing a few times—manage to hit the ball at 120 mph (50 m/s).[2]See Trackman's page on ball speed To get to the Moon from low Earth orbit, you would need enough fuel to add 5,300 m/s to your ship's speed. By putting those numbers into the rocket equation, we can find out how large a sack of golf balls would have to be for the average golfer to reach the Moon. If we plug it in to Wolfram|Alpha ... 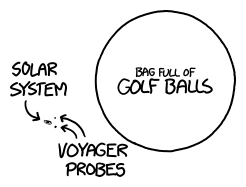 It would also promptly and violently collapse into a black hole.

Fortunately, we should be able to avert that disaster by making relatively small changes to the "120" in that equation. If we increase the golf ball's speed from 120 mph to 150, it shrinks the answer dramatically, and the required number of golf balls would fit snugly between the Sun and Mars. Still too big to avoid a catastrophic collapse, but we're getting somewhere. 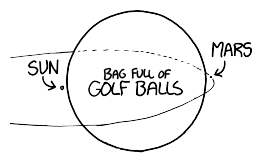 Tiger Woods can hit a golf ball at about 180 mph, which means that if he were powering our spaceship, the bag of golf balls would be only twice the diameter of the Sun! 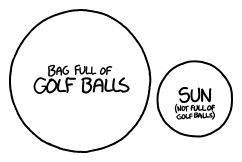 According to the Guinness Book of World Records, the record for fastest golf drive is 211 mph, set by Maurice Allen in 2012. This corresponds to a bag of golf balls only 100,000 kilometers across—smaller than Jupiter, but still (obviously) not practical.

However, golfer Ryan Winther claims to have beaten this record, though without Guinness observers there.[4]And, obviously, it doesn't count unless it's overseen by people from a beer company. If you want to set a world record, hit a golf ball at a radar gun and get it certified by the Mike's Hard Lemonade people. His ball speed was measured by something called the "Titleist Performance Institute" to be 226.7 mph, and he claims a personal best of 237 mph. If he could consistently hit 237 mph, we could shrink our fuel container down to the size of Earth[5]Although it would still be large enough to partially collapse under its own gravity, similar to what happened to the mole of moles. 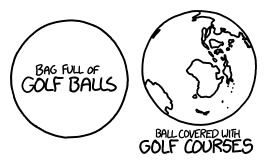 This still wouldn't work; even in a high orbit, the massive tides from your ship—which is much more massive than the Moon—would be highly disruptive.

We could probably shrink the fuel tank further by using "illegal" equipment. There are Superball-style balls and "trampoline face" clubs which can hit much farther, and which would not be permitted in tournament play.[6]On the other hand, we're talking about a sport that brought whites-only clubs with it into the 21st century, and Agusta, host of the Masters, admitted its first woman in 2012. So maybe we shouldn't worry too much about their traditional rules. A hypothetical 270 mph drive would allow a fuel tank the size of the Moon.

At this point, why are we even using a club?

According to research from the US Air Force Academy and BTG Research,[7]Oddly, both researchers have the name "Courtney". There are probably about 200,000 people in the US named Courtney (first or last); maybe we should recruit them to all build potato cannons. a potato cannon fueled by acetylene can launch a potato at 140 m/s (310 mph). If it were capable of launching golf balls at that speed,[8]We're not factoring in the weight of the acetylene—but then again, we also weren't factoring in the weight of the hamburgers the golfer would need to eat to keep hitting those drives. our ship would have a diameter of only 150 miles! 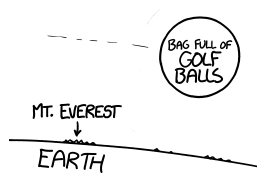 There's the small problem that manufacturing that many golf balls would cost quintillions of dollars. You could bring the size down further by making the potato cannon more and more powerful and efficient, but at that point you're simply building a rocket.

And the potato cannon scenario has an extra perk. If you somehow made the balls durable enough to survive atmospheric entry, and you set up your maneuver so the ejected golf balls covered the middle latitudes evenly, then over the course of this maneuver you would be statistically likely to hit a hole-in-one ... at every golf course in the world. 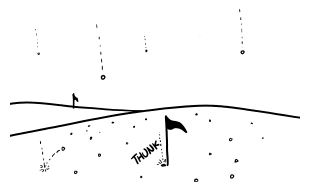