In terms of human-made objects, has Voyager 1 travelled the farthest distance? It's certainly the farthest from Earth we know about. But what about the edge of ultracentrifuges, or generator turbines that have been running for years, for example?

Spacecraft go a lot faster than centrifuges.[1]With a few exceptions, as you'll see in the next footnote. Spacecraft travel at speeds measured in kilometers per second, and they maintain those speeds constantly. Machine parts rarely move faster than a few hundred meters per second, which means that they probably won't catch up.

But the precise answer to this question depends on what reference frame we're using. Let's go through a few of the options:

Measured relative to the Sun

As far as moving through the Solar System goes, Voyager 1 is one of the slowest manmade objects.[2]It's not the very slowest—that title might belong to the Galileo spacecraft. On September 6th, 1996 at 10:57 (UT), Galileo's speed relative to the Sun dropped to 276 meters per second (618 mph), making it possibly the slowest manmade object in Solar System history. It's moving at an average speed of about 16 km/s, which is barely half of the Earth's orbital speed around the Sun.

It might seem a little intuitively weird that Voyager 1, which went fast enough to escape the Solar System, is going slower than Earth, which didn't. But it makes more sense if you think of the Solar System as a furious whirlpool with the planets caught in it. Voyager 1 (partly by pushing off those planets) managed to go fast enough that it was flung from the whirlpool, and is now drifting sedately across the water's surface.[3]And will continue doing so forever, unless we go get it.

In other words, every 1977 Plymouth Voyager van has traveled farther than Voyager 1. 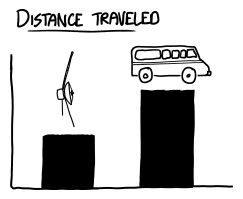 The longest-traveled manmade objects, by this measure, aren't spacecraft at all—they're whatever objects have been on the Earth the longest, and have thus traveled the farthest around the sun. The first known surviving manmade objects are 2.6-million-year-old stone tools from Ethiopia, which have traveled a total of about 250 light-years.

By comparison, the most well-traveled space probe (possibly the defunct Mariner 10, which has been in a relatively tight loop around the Sun for decades) has only traveled a couple of light-days, and the Voyagers have barely logged a dozen light-hours. 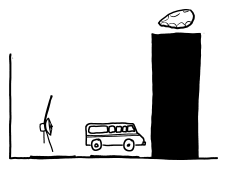 Measured relative to the Earth

By this measure, the Ethiopian stone tools win again. They were crafted relatively close to the Equator, so they've spent their millions of years traveling at about 460 meters per second as the Earth rotates, racking up 4 light-years on their odometers.

Speed over the Earth's surface

This rotating frame of reference effectively zeroes out the odometer on the stone tools. It also means that spacecraft far away from the Earth are sort of a weird case, since they "move" over the Earth's surface at the speed at which the planet spins. But that turns out not to matter, because the winner in this category is Vanguard 1, which has been in orbit since 1958, logging about 8.888 billion kilometers over the surface.

Normal speed, without any weird space stuff or Earth rotation or whatever

First, let's think about things that travel in a straight line. There are a lot of those, including a 1966 Volvo in Long Island which has driven 3 million miles. There are other vehicles that travel long distances—long-haul airliners, for example—but the winner in this category might actually be a human.

United Airlines flight attendant Ron Akana traveled about 20 million miles over his 63-year career, which might be the most of any human; even someone who sailed on steamships their whole life would have a hard time traveling that far.[4]It's not enough to beat the astronauts, though; cosmonaut Valeri Polyakov spent over a year in orbit, which adds up to a life odometer 10 times longer than Ron Akana's.​[5]You could argue that he doesn't qualify as a human-made object, but he was certainly made. And anyway, he may have an object he carried with him for most of those flights. The article mentions he was married, so perhaps his wedding ring qualifies.

Some train cars—or things used in trains—might push the total a little higher, but it seems unlikely that any kind of vehicle has traveled 100 million miles.

Things that rotate are a different matter.

We'll start with hard drive platters.[6]If you're reading this in the future, hard drive platters were these things that ... oh, never mind, it's not important. A 3.5" hard drive at 7200 rpm is moving at about 80 mph. Drives have a limited lifetime—especially if they're run constantly—but it's easy to imagine the edge of a platter somewhere logging millions of miles before it died.

The energy industry has some good candidates. The tips of wind turbines can move faster than cars, and turbines can run for decades. Even if the wind isn't constant, some of them have probably traveled tens of millions of miles.

The discs used in flywheel energy storage are even more promising than wind turbines. Flywheels are designed to spin (usually in a vacuum) for decades at a time, with rotor speeds above Mach 1. There's probably a flywheel somewhere whose rotor rim has traveled a nine-digit number of miles.[7]Hundreds of millions.

The edges of centrifuges, especially those used for uranium enrichment, can travel even faster—in fact, they push the very limits of how fast material can rotate.

There's an absolute limit to how fast anything can spin without breaking apart. For the very strongest materials, like carbon fiber and kevlar, the top speed that the outer edge of a spinning cylinder can travel is between 1 and 2 kilometers per second.[8]Units are weird: The maximum speed the edge of a cylinder of a given material can rotate is equal to the square root of its specific tensile strength (tensile strength over density). If we assume those materials and the precision techniques to produce them have only existed for the last half-century, then the greatest distance a centrifuge could possibly have traveled is about a billion kilometers—and the actual record is almost certainly much less. This is why uranium enrichment involves titanium centrifuges; the uranium needs to be spun very fast, and only specialized materials are strong enough to hold together at those speeds.

All in all, uranium enrichment centrifuges seem like a likely winner, with total lifetime odometer that might push into the hundreds of millions of miles.

So, exactly how far has the longest-operating centrifuge traveled?

Normally I don't give up like this, but if I had a way to estimate exactly how fast and for how long the labs in different countries have been spinning their uranium enrichment centrifuges, I would probably not be blogging about it here. 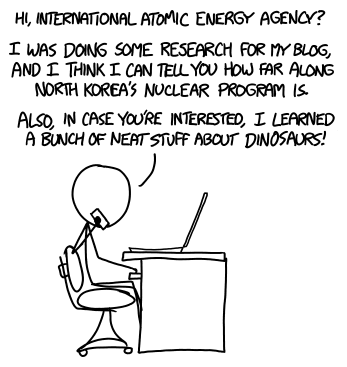 In any case, the centrifuges have logged far less total distance than many manmade objects, including (by various measures) the Ethiopian stone tools, the ISS, Mariner 10, and the Voyagers.

And for what it's worth, based on the "every 3,000 miles" rule, the Voyagers have missed several million oil changes each. 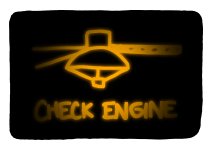 Maybe it's best that we just leave them.