I just moved into a new apartment. It includes hot water but I have to pay the electric bill. So being a person on a budget ... what's the best way to use my free faucet to generate electricity?

You could build a tiny hydroelectric dam in your tub. 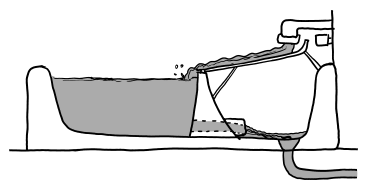 It would generate power, though not very much of it. The formula for power is pressure times flow rate.[1]Or, alternately, flow rate times density times height. Since bathtubs are pretty shallow, the pressure at the bottom isn't very high, so this works out to around two watts of power, or about 25 cents per month. 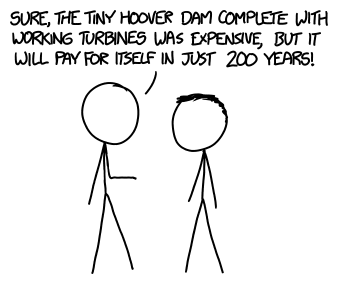 You can get more power if you increase the pressure of the water passing through the generator. To do this, you could increase the depth of the water. If you have two floors in your apartment, you could have the water column stretch from the second to the first floor, generating at least ten times the pressure and ten times the power.[2]This is similar to the rainwater scheme discussed in article 23. In effect, the local authorities would be paying to pump the water up to your apartment, and you're getting some of that energy back when you let it flow back down. 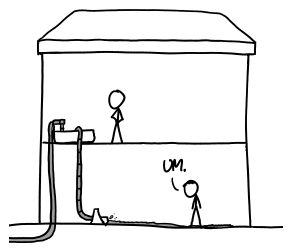 Could you use the faucet to pump the water up arbitrarily high, and get more and more power out of it as it falls back down?

No. First, you couldn't pump the water arbitrarily high. Household faucets have a pressure of around 4 atmospheres.[3]60 PSI. That's about 4000 millibars, if you measure your plumbing with an old barometer. You can lift water about 10 meters per atmosphere of pressure, which means that a household faucet can only pump water up by about 40 meters.

Second, as you can probably guess by looking at the above picture, pumping the water up 40 meters with water pressure and then back down doesn't accomplish anything—you can just hook the faucet up to your device, and let the water pressure drive the generator directly. In either case, for a bathtub faucet, this works out to almost 200 watts, or $25 per month.

You'd have to make sure your plumbing could handle the water. If your pipes get plugged up and stop draining, the faucet could fill your house in a matter of days. And either way, eventually someone from the city would probably show up to ask why you're using 40 tons of water every day. 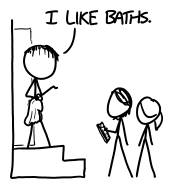 And really, with California suffering through its worst drought in history, this system might earn you some dirty looks. Sure, if you live far away from California, it's not like your water would have gone to ease their drought, but wasting a gigantic amount of water (and investing a bunch of money) to save a few dollars on your electricity bill might come across as a little rude.

A bathtub's flow rate is five or six orders of magnitude less than that of a river, but it's still a lot of water. Could we put it to a less selfish use?

There's a common piece of advice that says you should drink 8 glasses of water a day. No one really knows where this advice came from; people claim you should drink anywhere from 2 to 12 glasses of water daily,[4]For some reason, the saying only ever uses even numbers; a web search turns up lots of tips about six or eight glasses per day, but few advising you to drink seven. and none of them have any real evidence behind them. The only real solid advice I've heard is that if you're thirsty, you should drink some water.

If we stick to the "8 glasses of water" standard, then a bathtub faucet provides enough drinking water to sustain about 10,000 people indefinitely. In other words, the city of Manhattan could survive on the water from just 150 bathtubs.

But if your goal is to save money on your electric bill, there's a much more lucrative option.

Single servings of bottled water sells for a dollar or two per half-liter. A lot of bottled water comes from municipal sources—that is, it's tap water. Bottled water isn't necessarily about the water; often, people are paying for convenience or because there's an issue with their water supply. Whatever the reason, however, there's no reason to let Coca Cola keep all the profits.

If you bottled the water from your bathtub faucet and managed to sell each bottle for \$1.50, you'd make \$72 per minute—\$38 million every year. 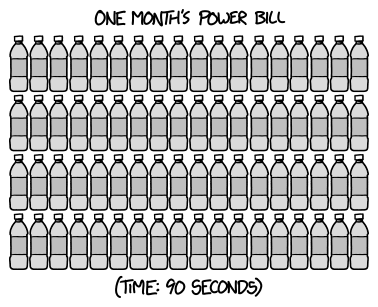 Then you won't have to worry about your power bill.