What would happen if the Earth's rotation were sped up until a day only lasted one second?

If this is going to happen, I hope it doesn't happen late in the afternoon next Friday.

The Earth rotates,[citation needed] which means its midsection is being flung outward by centrifugal force.[1]Which is still a real thing. This centrifugal force isn't strong enough to overcome gravity and tear the Earth apart, but it's enough to flatten the Earth slightly and make it so you weigh almost a pound less at the Equator than you do at the poles.[2]This is due to several effects, including centrifugal force, the flattened shape of the Earth, and the fact that if you go far enough toward the pole in North America people start offering you poutine.

If the Earth (and everything on it) were suddenly sped up so that a day only lasted one second, the Earth wouldn't even last a single day.[3]Either kind. The Equator would be moving at over 10% of the speed of light. Centrifugal force would become much stronger than gravity, and the material that makes up the Earth would be flung outward. 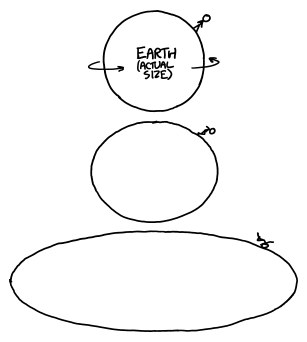 You wouldn't die instantly—you might survive for a few milliseconds or even seconds. That might not seem like much, but compared to the speed at which you'd die in other What If articles involving relativistic speeds, it's pretty long.

The Earth's crust and mantle would break apart into building-sized chunks. By the time a second[4]I mean, a day. had passed, the atmosphere would have spread out too thin to breathe—although even at the relatively stationary poles, you probably wouldn't survive long enough to asphyxiate.

In the first few seconds, the expansion would shatter the crust into spinning fragments and kill just about everyone on the planet, but that's relatively peaceful compared to what would happen next.

The first obstacle would be the belt of satellites around the Earth. After 40 milliseconds, the ISS would be struck by the edge of the expanding atmosphere and would be vaporized instantly. More satellites would follow. After a second and a half, the disc would reach the belt of geostationary satellites orbiting above the Equator. Each one would release a violent burst of gamma rays as the Earth consumed it.

The debris from the Earth would slice outward like an expanding buzzsaw. The disk would take about ten seconds to pass the Moon, another hour to spread past the Sun, and would span the Solar System within a day or two. Each time the disc engulfed an asteroid, it would spray a flood of energy in all directions, eventually sterilizing every surface in the Solar System.

Since the Earth is tilted, the Sun and the planets aren't usually lined up with the plane of the Earth's equator. They'd have a good chance of avoiding the buzzsaw[5]I keep reading this as "Buzzfeed". directly.

However, Next Friday, April 25th, the Moon will cross the plane of the Earth's equator (as it does every two weeks). If Dylan sped up the Earth at this moment, the Moon would be right in the path of the resulting planetary buzzsaw.

The impact would turn the moon into a comet, sending it rocketing from the Solar System in a spray of debris. The flash of light and heat would be so bright that if you were standing at the surface of the Sun, it would be brighter above you than below. Every surface in the Solar System—Europa's ice, Saturn's rings, and Mercury's rocky crust—would be scoured clean ... 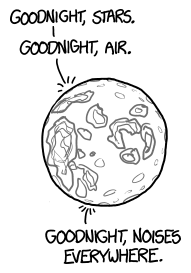