What took more energy, the building of the Great Pyramid of Giza or the Apollo Mission? If we could convert the energy to build the Great Pyramid, would it be enough to send a rocket to the Moon and back?

A Saturn V's fuel contains enough stored energy to lift up and stack about 20 pyramids worth of rock from the surface.

That's the simple physicist-style answer, based on calculating the energy required to lift idealized blocks of stone against the Earth's gravity.[1]Assume a spherical pyramid in a vacuum ... In practice, pyramid construction wasn't so simple. Thanks to friction, the Egyptians probably expended more energy dragging the stones across the ground than lifting them upward—and the "lifting upward" involved a lot of friction, too.

Most of the energy they expended was lost to the heat of friction, but about 1012 joules of it remains in the Great Pyramid, stored as gravitational potential energy. If all this energy were liberated and—somehow—used to accelerate an Apollo spacecraft ...

... it wouldn't be enough to launch it to the Moon.

On the other hand, the reverse probably wouldn't work, either.

But maybe we're making the wrong kind of comparison. Why did Michael—like many others—compare the pyramids to the Apollo program in the first place? Perhaps it's simply that they both look like they took a huge amount of work—and maybe that's the best way to compare them.

The Great Pyramid, according to one analysis, took an average of 13,200 people 10 years to construct. The Apollo project took an average of about 200,000 people, working over a similar period of time, to launch six Moon landings and another 6-10 missions using the same equipment before and after—which, if you divided it up equally,[2]Which is a bit of a stretch, since launching a second Apollo mission probably lets you reuse a lot more of your work on the first one than building a second pyramid. is about 15,000 hours each. In other words, each Apollo mission took about the same amount of work as each pyramid.[3]The Apollo program was unpopular at the time; people thought it was a waste of money. While it's easy to remember only the excited children gathered around TVs to watch the first Moon landing, the truth is, spending public money on space exploration has never been all that popular with the general public. For all we know, the pyramids were just as unpopular with the Egyptian public in their time. They probably weren't built by slaves, but that doesn't mean everyone was happy about them.

There are all kinds of ways we could measure the energy that went into various megaprojects, but we end up making a lot of subjective judgment calls about what counts as part of the project. Instead, let's go back to the simple idea of gravitational potential energy, and see how the Great Pyramid compares to other structures by that measure.

The gravitational energy locked up in the Great Pyramid—on the order of 1012 joules—is more than in even the biggest modern skyscrapers. The Burj Khalifa may be huge, but it's mostly empty space. Egyptian pyramids, on the other hand, are solid rock nearly all the way through.

But these are all dwarfed by our biggest rock-and-dirt-lifting projects: mines. Mining involves lifting even more matter against gravity than building concrete dams, pyramids, or landfills. Humans have put a huge amount of industrial power into digging mines, so it's no surprise that the biggest mines involve 1014 to 1015 joules of gravitational energy—orders of magnitude more than the biggest aboveground structures. After all, open-pit mines are basically reverse pyramids: 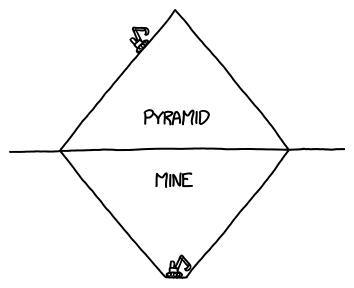 These projects are pretty big. However, the Dutch have envisioned something bigger.

In 2011, a Dutch writer launched Die berg komt er, a semi-serious plan to build an artificial mountain in the Netherlands. Some versions of the plan would involve moving far more material than in even the largest mines, and the immense weight would probably cause the Dutch countryside to sink—which isn't really something they need more of.[4]For this reason, most serious proposals involve a hollow mountain. I mean, serious compared to the other ones.

This plan is obviously impractical. Fortunately, someone else has come up with a better one.

A group of Germans, led by architect Jakob Tigges, have decided that Berlin already has an artificial mountain. Built on the site of the former Tempelhof Airport, "The Berg" towers 1,071 meters above the surrounding landscape, edging out the Burj Khalifa as the tallest manmade structure on Earth. It has a website, a Facebook group, photos, testimonials, and tourism information.

Now, nobody can see this mountain. But supporters insist that it's there.

If only the Egyptians had thought of that one.