What if Au Bon Pain lost this lawsuit and had to pay the plaintiff $2 undecillion?

The bakery-cafe chain Au Bon Pain (with a few other organizations) is being sued. This is how much money the person suing them is demanding:

This is how much sellable stuff there is in the world:

This is the estimated economic value of all goods and services produced by humanity since we first evolved:

Even if Au Bon Pain conquers the planet and puts everyone to work for them from now until the stars die, they wouldn't make a dent in the bill.

Maybe people just aren't that valuable. The EPA currently values a human life at $8.7 million, although they go to great lengths to point out that technically this is not actually the value any specific person places on another person's individual life.[1]Note that they don't say whether they assume that amount would be higher or lower. In any case, by their measure, the total value we place on all the world's humans is only about $60 quadrillion.[2]The world's combined oil reserves are only worth a few hundred trillion, which suggests that purely from an accounting standpoint, the "no blood for oil" slogan makes a lot of sense.

But while people may be worthless,[3]I'm rounding down. we're hardly all there is on the planet. Out of all the Earth's atoms, only 1 out of every 10 trillion is part of a human.

The Earth's crust contains a bunch of atoms,[citation needed] some of which are valuable. If you extracted all the elements, purified them,[4]This is just one of many reasons that this idea wouldn't make sense in practice. The reason many elements (like U-235) are valuable is that it's hard to manufacture or purify them, not just because they're rare. and sold them, the market would crash.[5]Both in the sense that the supply would cause a drop in prices, and the sense that the market is like 20 miles above the mantle and you just removed the crust supporting it. But if you somehow sold them at their current market price, they would be worth ...

Oddly, most of this value comes from potassium and calcium, and most of the rest comes from sodium and iron. If you're going to sell the Earth's crust for scrap, those are probably the ones you should sift out.

Sadly, even selling the crust for scrap doesn't get us close to the numbers we need.

We could include the core,[6]It's down there. which is iron and nickel with a dash of precious metals, but it turns out it wouldn't help. The amount demanded from Au Bon Pain is just too large. In fact, an Earth made of solid gold wouldn't be enough. The Sun's weight in platinum wouldn't be, either.

By weight, the single most valuable thing that's been bought and sold on an open market is probably the Treskilling Yellow postage stamp. There's only one known copy of it, and in 2010 it sold for \$2,300,000. That works out to about \$30 billion per kilogram of stamps. If the Earth's weight were entirely postage stamps, it would still not be enough to pay off Au Bon Pain's potential debt.[7]Also, the stamps would probably be less valuable now that there is literally an entire planet of them, but that's the least of Au Bon Pain's problems.

If Au Bon Pain & co decided to be intentionally difficult, and pay their debt entirely in pennies, they would form a sphere that would squeeze inside the orbit of Mercury.[8]The fate of this sphere of pennies is left as an exercise for the reader. The fate of Mercury is that it would fall into the pennies and disintegrate. The bottom line is that paying this settlement would be, in almost any sense of the word, impossible.

Kevin, who asked this question, is a lawyer and author of the legal humor blog that reported on the Au Bon Pain case.[9]And which we encountered in Question #90. He told me that the world's most highly-paid lawyer—on an hourly basis—is probably former Solicitor General Ted Olson, who recently disclosed in bankruptcy filings that he charges $1,800 per hour.

Suppose there are 40 billion habitable planets in our galaxy, and every one of them hosts an Earth-sized population of 7 billion Ted Olsons. 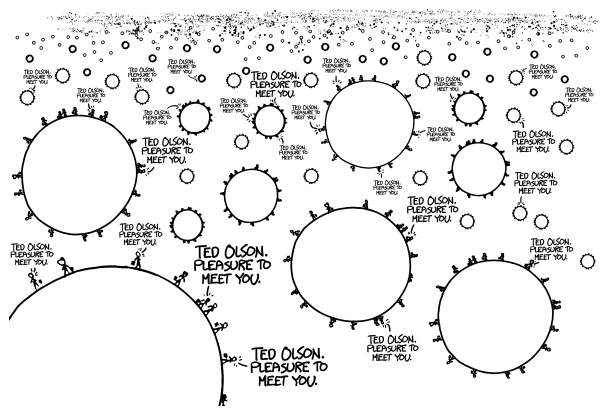 If Au Bon Pain hired every Ted Olson in the galaxy to defend them in this case, and had them all work 80-hour weeks, 52 weeks a year, for a thousand generations[10]This scenario assumes that the former Solicitor General reproduces asexually....

... it would still cost them less than if they lost.