I was watching this video and was wondering: How many birds there would need to be for gravity to take over and force them into a gargantuan ball of birds?

The video shows starlings, birds which ...

Side note: The following is the first sentence from a journal article on starling metabolism:

We trained two starlings (Sturnus vulgaris) to fly in a wind tunnel whilst wearing respirometry masks.

I really think the paper should have stopped there; no matter what their results were, they can't possibly improve on the achievement they opened with.

Anyway, back to gravity.

To calculate the gravitational force from a whole flock of starlings, we need to know the flock's density.

Conveniently, a 2008 paper in Animal Behavior gathered some detailed statistics on starling flocks. The highest density they saw was about half a starling per cubic meter.[1]0.54 (•)>m-3 If the birds weigh about 85 grams each, that means the air in a starling flock weighs 25 times more than the starlings themselves.[2]This makes a certain intuitive sense. If they were that much heavier than the air between them, it's hard to imagine how they'd be able to stay airborne by pushing off of it with their wings.

The collapse of giant clouds of gas or birds is governed by the equation for the Jeans instability. It suggests that in order to undergo collapse, a cloud of uniform room-temperature air full of starlings would have to be much larger than the Earth to collapse. 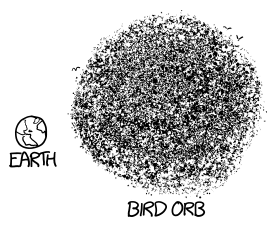 The gas cloud's gravity would be very weak, so the starlings would probably have a hard time flying until they got used to it. (Birds can fly in zero g—or, at least, they flap around in confusion. But, to be fair, that's how I'd react if I were abruptly and without warning yanked from my bed and tossed into the air in a zero g airplane cabin.)

Such a cloud wouldn't form in the first place without some extra compression. To collapse naturally under its own gravity, the starling cloud would need to be so large that it would engulf the Solar System. When it did collapse, it would heat up, and the starlings ...