What percentage of the Sun's heat (per day) does the population of Earth eat in calories per year? What changes could be made to our diets for the amount of calories to equal the energy of the Sun? 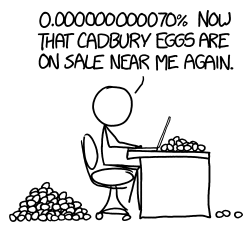 A McDonald's Big Mac contains 540 (dietary) calories of energy, or about 2,250,000 joules. The Sun's output is 382,800,000,000,000,000,000,000,000 joules per second.[1]Also known as watts. This is a rare case of a common-in-America unit which is secretly SI-friendly. Of course, we immediately worked our way around to measuring stored energy in kWh (and mAh), and now everything is terrible again. That's enough to tell us that we're going to have a hard time catching up with the Sun by eating more burgers.

Why is this so difficult?

Most of the Sun's mass is concentrated in the core, where energy is released as hydrogen fuses into helium. By volume, the Sun's core doesn't actually produce that much energy—a blob of core matter produces about the same amount of energy as the body heat of a reptile of the same size,[2]A Wikipedia factoid also compares the Sun's heat-per-unit-volume to the heat produced by an active compost pile, although the energy production from compost varies with temperature—since a hot compost pile kills off the organisms that do the composting. and less than a warmer-bodied mammal. The Sun is hotter than a reptile[citation needed] because it's so large—all that heat adds up.[3]A large object also has more surface area to radiate heat away, but since surface area is proportional to radius2 while the amount of heat-producing material is proportional to radius3, making things bigger generally makes them hotter.

Reptiles may produce heat at approximately the same rate as the stuff in the Sun, but if a reptile doesn't eat for a few weeks or months, it runs out of energy and starves. The Sun, on the other hand, has been burning for billions of years and will last for billions more—because nuclear fusion produces much more energy than metabolizing fat or muscle.

How much more? Strangely, we can come up with a pretty decent estimate just from what we know about animals. Animals live a few weeks—or months, in the case of some snakes—on their own stored reserves, while the Sun will last about 10 billion years. That's a difference of about 100 billion-fold. This is roughly similar to the ratio between the energy stored in a snake-meat Big Mac and the energy stored in a Big Mac-sized chunk of the Sun's core.[5]If you calculate out the exact actual ratios here, you'll find that the sun-to-big-mac energy ratio is a bit lower than the sun-to-lizard lifespan ratio. This is partly explained by the fact that animals are full of bones and brains and stuff, and can't efficiently consume their entire body volume as if they were a giant Big Mac. 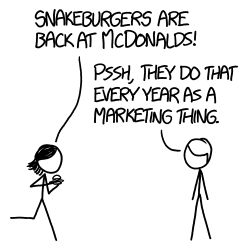 If we want to eat enough food to keep up with the Sun's energy-use rate, we have to eat a lot more. A typical person eats a few thousand calories per day, and we probably can't improve on that too much—we can't all be The Rock. To keep up with the Sun, what we really need is more people.

At the end of this article, we imagined a galaxy full of habitable planets, each one hosting 7 billion clones of former solicitor general Ted Olson. (Don't ask.) If the Teds ate a normal diet, the total calorie consumption of that galaxy would still fall short of the Sun. We'd need approximately a thousand galaxies worth of burger-eating Ted Olsons to achieve our goal.

It's important to spread this food consumption out across multiple galaxies, because if you gathered all that food in once place, you'd have a big problem. Since food has such a low energy density compared to the Sun, you need a lot of food to keep up with the Sun. Matching a few days' worth of Sun output would require a sphere of hamburgers the size of the Earth, and keeping up with the Sun over its entire lifetime would take a pile of burgers much larger than the Sun. In fact, it would be heavier than the supermassive black hole at the center of the galaxy.[6]Which would promptly create a new black hole. And possibly a new center of the galaxy, for all I know, although I'd want to play with Universe Sandbox for a while before making any sort of guess about how that would play out.

The bottom line: If you want to keep up with the Sun's output by feeding people burgers, you'll need to open some intergalactic franchises.