How dangerous is it, really, to be in a pool during a thunderstorm?

What would happen if you were taking a shower when you were struck by lightning? Or standing under a waterfall?

What would happen if you were in a boat or a plane that got hit by lightning? Or a submarine?

What if you were changing the light at the top of a radio tower and lightning struck? Or what if you were doing a backflip? Or standing in a graphite field? Or looking straight up at the bolt?

What would happen if lightning struck a bullet in midair?

What if you were flashing your BIOS during a thunderstorm and you got hit by lightning?

Before we go any further, I want to emphasize something:

I am not an authority on lightning safety. I am a guy who draws pictures on the internet. I like when things catch fire and explode, which means I do not have your best interests in mind. The authorities on lightning safety are the folks at the US National Weather Service:

To answer these questions, we need to get an idea of where lightning is likely to go. There’s a cool trick for this, and I’ll give it away right here at the start: Roll an imaginary 60-meter sphere across the landscape and look at where it touches.

They say lightning strikes the tallest thing around. That’s the kind of maddeningly inexact statement that immediately sparks all kinds of questions. How far is “around”? I mean, not all lightning hits Mt. Everest. But does it find the tallest person in a crowd? The tallest person I know is probably Ryan North (paleontologists estimate he stood nearly five meters tall at the shoulder). Should I try to hang around him for lightning safety reasons? What about other reasons? (This is probably why you people ask the questions on this blog, not me.)

But how does lightning pick its targets?

This video, captured by Tom A. Warner, might be the single coolest piece of footage I’ve ever seen. It shows a bolt of lightning recorded at 7,207 frames per second. The 33-second video represents barely a tenth of a second of real time. There are lots of slow-motion videos of lightning, but this is by far the best I’ve found.

Tom’s video gives an idea of how lightning moves. It starts with a branching bundle of charge—the “leader”—descending from the cloud. This is what you see in the first part of the video. It spreads downward at speeds of tens to hundreds of kilometers per second, covering the few kilometers to the ground in a few dozen milliseconds.

The leader carries comparatively little current—on the order of 200 amps. That’s still enough to kill you, but it’s nothing compared to what happens next. Once the leader makes contact with the ground, the cloud and the ground equalize with a massive discharge of more like 20,000 amps. This is the blinding flash you see. It races back up the channel at a significant fraction of the speed of light, covering the distance in under a millisecond—all within a single frame of that video.

(Technical detail: while it’s called a “return stroke”, charge is still flowing downward. However, the discharge appears to propagate upward. This effect similar to how when a traffic light turns green, or whatever color, the cars in front start moving, then the cars in back, so the movement appears to spread backward.)

So the place on the ground where we see a bolt “strike” is the spot where the leader first makes contact with the surface. The leader moves down through the air in little jumps. It’s ultimately feeling its way toward the (usually) positive charge in the ground. However, it only “feels” charges within a few tens of meters of the tip. If there’s something connected to the ground within that distance, the bolt will jump to it. Otherwise, it jumps out in a semi-random direction and repeats the process. 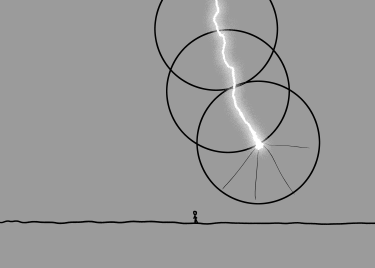 This is where the 60-meter sphere comes in. It’s a way to imagine what spots might be the first thing the leader senses—the places it might jump to in its next (final) step.

To figure out where lightning is likely to hit, you roll the imaginary 60-meter sphere across the landscape (for safety reasons, do not use a real sphere). This sphere climbs up over trees and buildings without passing through anything (or rolling it up). Places the surface makes contact—treetops, fenceposts, and golfers in fields—are potential lightning targets.

This means you can calculate a lightning “shadow” around an object of height h on a flat surface. 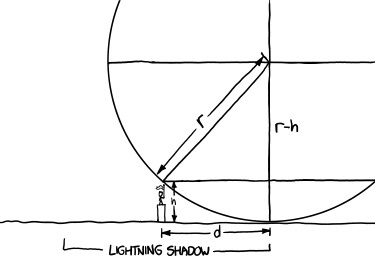 The shadow is the area where the leader is likely to hit the tall object instead of the ground around it:

Now, that doesn’t mean you’re safe on the ground around it—often, it means the opposite. After the current hits the tall object, it flows out into the ground. If you’re touching the ground nearby, it can travel through your body. Of the 28 people killed by lightning so far this year, 13 were standing under or near trees.

With all this in mind, let’s look at possible lightning paths for the scenarios in the questions.

How dangerous is it, really, to be in a pool during a thunderstorm?

Pretty dangerous. Water is conductive, but that’s not the biggest problem—the biggest problem is that if you’re swimming, your head is poking up from a large flat surface. But lightning striking the water near you would still be bad. The 20,000 amps spread outward—mostly over the surface—but how much of a jolt it will give you at what distance is hard to calculate

My guess is that you’d be in significant danger anywhere within a minimum of a dozen meters—and further in fresh water, because the current will be happier to take a shortcut through you.

What would happen if you were taking a shower when you were struck by lightning? Or standing under a waterfall? 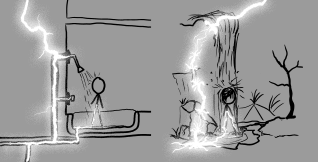 You’re not in danger from the spray—it’s just a bunch of droplets of water in the air. It’s the tub under your feet, and the puddle of water in contact with the plumbing, that’s the real threat.

What would happen if you were in a boat or a plane that got hit by lightning? Or a submarine?

What if you were changing the light at the top of a radio tower and lightning struck? Or what if you were doing a backflip? Or standing in a graphite field? Or looking straight up at the bolt?

What would happen if lightning struck a bullet in midair?

The bullet won't affect the path the lightning takes. You'd have somehow to time the shot so the bullet was in the middle of the bolt when the return stroke happened.

The core of a lightning bolt is a few centimeters in diameter. A bullet fired from an AK-47 is about 26 mm long and moves at about 700 millimeters every millisecond.

The bullet has a copper coating over a lead core. Copper is a fantastically good conductor of electricity, and much of the 20,000 amps could easily take a shortcut through the bullet.

Surprisingly, the bullet handles it pretty well. If it were sitting still, the current would quickly heat and melt the metal. But it’s moving along so quickly that it exits the channel before it can be warmed by more than a few degrees. It continues on to its target relatively unaffected. There are some curious electromagnetic forces created by the magnetic field around the bolt and the current flow through the bullet, but none of the ones I examined changed the overall picture very much.

What if you were flashing your BIOS during a thunderstorm and you got hit by lightning?