How much would the sea level fall if every ship were removed all at once from the Earth's waters?

About six microns—slightly more than the diameter of a strand of spider silk.

Weighing ships is confusing. There are a bunch of different measurements of the size of a ship, and many of them, like gross tonnage, are actually measures of the volume of the ship’s rooms and other internal spaces, not its weight.

The UN Conference on Trade and Development publishes estimates of the size of the world shipping fleet.

What the UNCTD publishes is “deadweight tonnage”, which is the maximum weight of the ship’s fuel, cargo, and crew. What we want is “displacement”. Unfortunately, comprehensive numbers for displacement are harder to find.

Fortunately, we can estimate it. Brian Barrass’s book Ship Design and Performance for Masters and Mates gives a table of ratios of deadweight tonnage to displacement for different types of ships.

Extrapolating from the last few years of UNCTD data, and using the coefficients from the book, suggests that the world fleet weighs about 2.15 billion tons when fully loaded. The main component of the fleet by weight is oil tankers and bulk ore-carrying ships, which make up over two-thirds of the total. (The UNCTD data doesn’t include small recreational boats or naval fleets. However, based on some numbers for naval fleets and recreational boats, neither one contributes much to the total.)

A ton of water is about a cubic meter. 2.15 billion cubic meters divided by the surface area of the oceans equals about 6 microns (0.006 mm).

But you don’t have to worry about that six-micron sea level drop. The oceans are currently rising at about 3.3 millimeters per year due to global warming (through both glacial melting and thermal expansion of seawater).

At that rate (normalized for seasonal variation and short-term fluctations), if you removed every ship from the ocean, the water would be back up to its original average level in 16 hours.

Sea levels will likely rise a few feet by the year 2100. Current fish wet biomass is about 2 billion tons, so removing them won’t make a dent either. (Marine fish biomass dropped by 80% over the last century, which—taking into consideration the growth rate of the world’s shipping fleet—leads to an odd conclusion: Sometime in the last few years, we reached a point where there are, by weight, more ships in the ocean than fish.)

And what about the old joke about how much deeper the ocean would be without sponges? While estimates of sponge biomass are hard to come by, the answer is probably that if you removed all the sponges, sea level would drop by no more than a few microns ... and much less if you squeezed them out first. 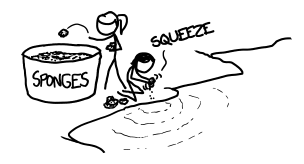