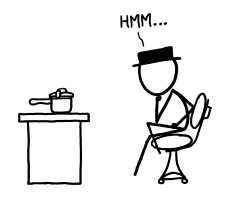 So what makes a pressure cooker dangerous?

Imagine a world where Pepsi is scalding hot. Now imagine that someone shakes up a can of Pepsi and sets it in front of you.

That’s the real threat from a pressure cooker: If the seal fails (or the lid is opened too early), it can spray scalding stew in all directions.

But it’s not really an explosion.

The blast couldn’t even fling the lid very far. If you mounted a rifle-style barrel on a pressure cooker, even in ideal circumstances it wouldn’t be able to fire the lid much faster than you could throw it. Any potato cannon (especially this one) could do better.

Of course, the question wasn’t about whether a pressure cooker is likely to explode. It was about what the worst thing that could happen was.

If you disable the safety valve, there are plenty of ways to produce much more dangerous pressures. You could completely fill it with water and heat it, fill it with Drano and aluminum foil, or just pump in air from a compressor.

The result would depend on your pressure cooker. Chances are it would start to leak. If it didn’t, and it somehow stayed together up a few hundred atmospheres (pressures typical of scuba tank), when it finally ruptured it could easily kill you. 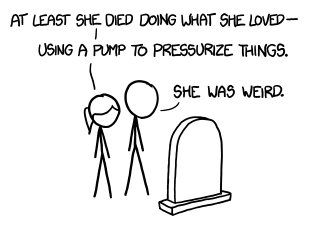 Even so, that’s far from the worst thing you could do with a pressure cooker.

Frankly, there are so many options it would be impossible to survey them all. But for my money, one of the most horrifying things you could do is this:

(Note: Never try this, for reasons which will become obvious in a moment.)

Fill the cooker with oxygen up to 5 PSI, then pump in fluorine until it starts escaping through the safety valve. Put the vessel over an open flame until it reaches 700°C (That’s °C, not °F. Yes, this will probably set off the smoke alarm.) Now, pump the hot gas over a liquid-oxygen-cooled stainless steel surface.

The procedure here is a little tricky, but if you do things right, the gas will condense into dioxygen difluoride (O2F2).

And that stuff is awful.

Ray Bradbury taught us that paper burns when exposed to oxygen at temperatures above 451°F. Dioxygen difluoride is so volatile that it makes almost any organic substance ignite and explode at any temperature hotter than 300°F below zero. It can literally make ice catch fire.

In an article about O2F2, Chemistry blogger Derek Lowe (of the excellent In The Pipeline) used phrases like “violently hideous”, “deeply alarming”, and “chemicals that I never hope to encounter”. Another article refers to fluorine as “the gas of Lucifer”, and lists chemists who were poisoned or blown up while attempting to work with it.

If your house is heated by natural gas, and it happens to contain hydrogen sulfide, you could pipe some of it into your container of O2F2. In addition to a massive explosion, this will also produce a cloud of hydrogen fluoride gas. Hydrogen fluoride can dissolve human tissue on contact, starting with your lungs and corneas.

As Lowe points out, the chemistry of this kind of reaction (O2F2 and sulfides) is largely unexplored.

Which gives us an answer to our question. What’s the worst thing that can happen in a pressure cooker? 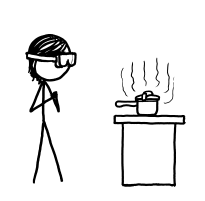