What is the longest possible sunset you can experience while driving, assuming we are obeying the speed limit and driving on paved roads?

To answer this, we have to be sure what we mean by “sunset".

This is a sunset: 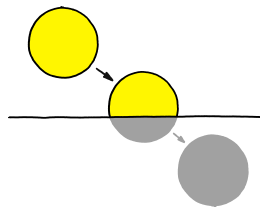 This is not a sunset:

For the purposes of our question, this is not a sunset:

This is also not a sunset: 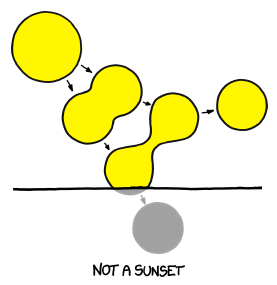 This is definitely not a sunset: 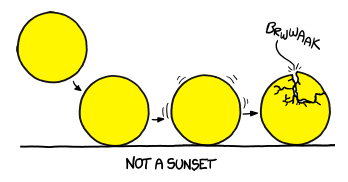 And no matter what happens here, this will not be a sunset: 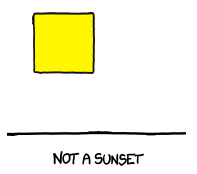 For a sunset to count, the Sun has to set behind the idealized horizon, not just behind a nearby hill. This is not a sunset, even though it seems like one: 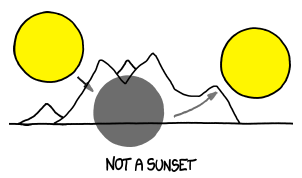 The reason that can’t count as a sunset is that if you could use arbitrary obstacles, you could cause a sunset whenever you wanted by hiding behind a rock.

Note: We also have to consider refraction. The Earth’s atmosphere bends light, so when the Sun is at the horizon it appears about one Sun-width higher than it would otherwise. The standard practice seems to be to include the average effect of this in all calculations, which I’ve done here.

At the Equator in March and September, sunset is a hair over two minutes long. Closer to the poles, in places like the London, it can take between 200 and 300 seconds. It’s shortest in spring and fall (when the Sun is over the equator) and longest in the summer and winter.

If you stand still at the South Pole in early March, the Sun stays in the sky all day, making a full circle just above the horizon. Sometime around March 21st, it touches the horizon for the only sunset of the year. This sunset takes 38-40 hours, which means it makes more than a full circuit around the horizon while setting.

But Michael’s question was very clever. He asked about the longest sunset you can experience on a paved road. There’s a road to the research station at the South Pole, but it’s not paved—it’s made of packed snow. There are no paved roads anywhere near either pole.

The closest road that really qualifies is probably the main road in Longyearbyen, on the island of Svalbard, Norway. (The end of the airport runway in Longyearbyen gets you slightly further, although driving there might get you in trouble.)

Longyearbyen is actually closer to the North Pole than McMurdo Station in Antarctica is to the South Pole. There are a handful of military, research, and fishing stations further north, but none of them have much in the way of roads; just airstrips, which are usually gravel and snow.

If you putter around downtown Longyearbyen (get a picture with the “polar bear crossing” sign), the longest sunset you could experience would be a few minutes short of an hour. It doesn’t actually matter if you drive or not; the town is too small for your movement to make a difference.

But if you head a little ways south, you can do even better.

If you start driving from the tropics and stay on paved roads, the furthest north you can get is the tip of European Route 69 in Norway. There are a number of roads crisscrossing northern Scandinavia, so that seems like a good place to start. But which road should we use?

Intuitively, it seems like we want to be as far north as possible. The closer we are to the pole, the easier it is to keep up with the Sun.

Unfortunately, it turns out keeping up with the Sun isn’t a good strategy. Even in those high Norwegian latitudes, the Sun is just too fast. At the tip of European Route 69—the farthest you can get from the Equator while driving on paved roads—you’d still have to drive at about half the speed of sound to keep up with the Sun. (And E69 runs north-south, not east-west, so you’d drive into the Barents Sea anyway.)

If you're in northern Norway on a day when the Sun just barely sets and then rises again, the terminator (day-night line) moves across the land in this pattern:

(Not to be confused with the Terminator, which moves across the land in this pattern:)

To get a long sunset, the strategy is simple: Wait for the date when the terminator will just barely reach your position. Sit in your car until the terminator reaches you, drive north to stay a little ahead of it for as long as you can (depending on the local road layout), then u-turn and drive back south fast enough that you can get past it to the safety of darkness. (These instructions also work for the other kind of Terminator.)

Surprisingly, this strategy works about equally well anywhere inside the Arctic Circle, so you can get this lengthy sunset on many roads across Finland and Norway. I ran a search for long-sunset driving paths using PyEphem and some GPS traces of Norwegian highways. I found that over a wide range of routes and driving speeds, the longest sunset was consistently about 95 minutes—an improvement of about 40 minutes over the Svalbard sit-in-one-place strategy.

But if you are stuck in Svalbard and want to make the sunset—or sunrise—last a little longer, you can always try spinning counterclockwise. It’s true that it will only add an immeasurably small fraction of a nanosecond. But depending on who you’re with ...