What if everyone actually had only one soul mate, a random person somewhere in the world?

What a nightmare that would be.

There are a lot of problems with the concept of a single random soul mate. As Tim Minchin put it in his song If I Didn’t Have You:

Your love is one in a million
You couldn’t buy it at any price.

But of the 9.999 hundred thousand other loves,
Statistically, some of them would be equally nice.

But what if we did have one randomly-assigned perfect soul mate, and we couldn’t be happy with anyone else? Would we find each other?

We’ll assume your soul mate is set at birth. You know nothing about who or where they are, but—as in the romantic cliché—you’ll recognize each other the moment your eyes meet.

Right away, this raises a few questions. For starters, is your soul mate even still alive? A hundred billion or so humans have ever lived, but only seven billion are alive now (which gives the human condition a 93% mortality rate). If we’re all paired up at random, 90% of our soul mates are long dead. 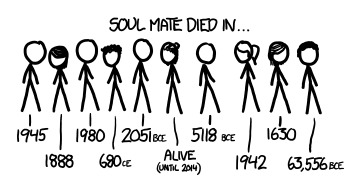 So let’s assume your soul mate lives at the same time as you. Furthermore, to keep things from getting creepy, we’ll assume they’re within a few years of your age. (This is stricter than the standard age gap creepiness formula, but if we assume a 30-year-old and a 40-year-old can be soul mates, then the creepiness rule is violated if they accidentally meet 15 years earlier.) With the same-age restriction, most of us have a pool of around half a billion potential matches.

But what about gender and sexual orientation? And culture? And language? We could keep using demographics to try to break things down further, but we’d be drifting away from the idea of a random soul mate. In our scenario, you don’t know anything about who your soul mate will be until you look into their eyes. Everybody has only one orientation—toward their soul mate.

The odds of running into your soul mate are incredibly small. The number of strangers we make eye contact with each day is hard to estimate. It can vary from almost none (shut-ins or people in small towns) to many thousands (a police officer in Times Square). Let’s suppose you lock eyes with an average of a few dozen new strangers each day. (I’m pretty introverted, so for me that’s definitely a generous estimate.) If 10% of them are close to your age, that’s around 50,000 people in a lifetime. Given that you have 500,000,000 potential soul mates, it means you’ll only find true love in one lifetime out of ten thousand. 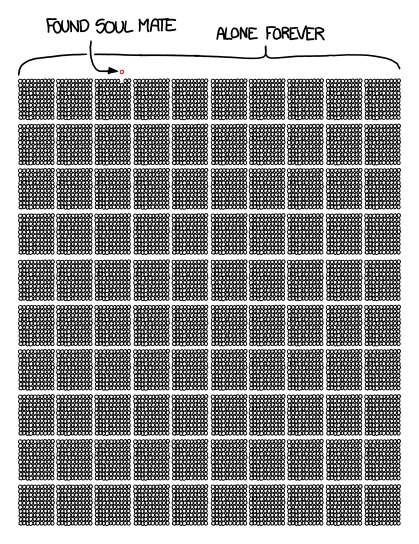 But with the threat of dying alone looming so imminently, society could restructure to try to enable as much eye contact as possible. We could put together massive conveyer belts to move lines of people past each other … 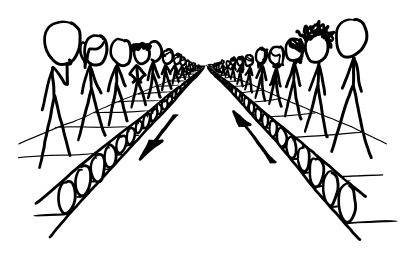 ... but if the eye contact effect works over webcams, we could just use a modified version of ChatRoulette. 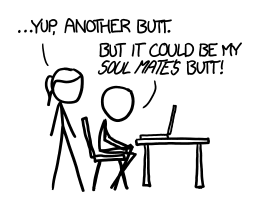 If everyone used the system for eight hours a day, seven days a week, and if it takes you a couple seconds to decide if someone’s your soul mate, this system could—in theory—match everyone up with their soul mates in a few decades. (I modeled a few simple systems to estimate how quickly people would pair off and drop out of the singles pool. If you want to try to work through the math for a particular setup, you might start by looking at derangement problems.)

In the real world, many people have trouble finding any time at all for romance—few could devote two decades to it. So maybe only rich kids would be able to afford to sit around on SoulMateRoulette. Unfortunately for the proverbial 1%, most of their soul mates are to be found in the other 99%. If only 1% of people use the service, then 1% of that 1% would find their match through this system—one in ten thousand.

The other 99% of the 1% (“We are the zero point nine nine percent!”) would have an incentive to get more people into the system. They might sponsor projects akin to One Laptop Per Child (but with a sleazier vibe). Careers like “cashier” and “police officer in Times Square” would become high-status prizes because of the eye contact potential. People would flock to cities and public gathering places to find love—just as they do now.

But even if a bunch of us spent years on SoulMateRoulette, another bunch of us managed to hold jobs that offered constant eye contact with strangers, and the rest of us just hoped for luck, only a small minority of us would ever find true love. The rest of us would be out of luck.

Given all the stress and pressure, some people would fake it. They’d want to join the club, so they’d get together with another lonely person and stage a fake soul mate encounter. They’d marry, hide their relationship problems, and struggle to present a happy face to their friends and family. (Of course, this never happens in our world.)

All in all, the world of random soul mates is an even lonelier one than ours. I prefer Tim Minchin’s take on things:

With all my heart and all my mind I know one thing is true:
I have just one life and just one love and, my love, that love is you.

And if it wasn't for you, baby,
I really think that I would
have somebody else.